So... when the fire in your inspiration and passion is lit, use it to work it all out before the flame withers out... which led me to postpone working on the 11sec May for the time being.

I started the first idea sketch on Wednesday night if I remembered correctly after listening continuously to Hirasawa Susumu's ~ "Shizuku Ippai no Kioku" the whole day while working on 11sec May competition, which I will be posting up soon. 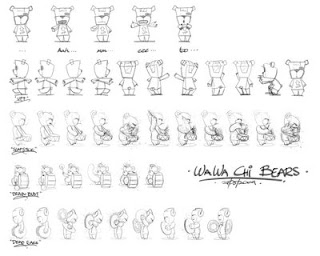 Anyway, animation wasn't that hard to do after all it's pretty loose and scribbly and initially was just planning to do like 4 drawings for each character to play around.... ultimately I couldn't help myself but to make it a bit more smoother than the constant cycle *on 8's. Because of the minimal drawings ~ 5 to be exact ~ for lipsync~ing "UP^" to the vocals, I found it interesting to play with the timing of the mouth shapes to create certain visual interpretation of the sounds, example; "What" by using a combination of "mm" "too" "aah" "eee", creates something more like "Mooaahht" and by using a combination of "aah" and "eee" you could create a sentence :)

Anyway, by the time you read this hopefully I've done uploading the clip to YouTube.... which is taking forever..... because it's about half a Gig :) *Reuploaded a 50Mb version with better audio sync, watch In HQ... the default compression is crappy.

A small "problem" was that the actual song started to faded off near the end. Thus after brainstorming about it for like 3¼ of a sec, I stupendously added in the "Volume Reduce Gag", ain't our brains useful...

*The term "on 8's" is a traditional 2d animation lingual for a drawings shot on 8 frames instead of the usual "on 1's" (1 drawing perframe) or "on 2's" (1 drawing on 2 frames). To put it in perspective, movies are usually on 24 frames persecond, your TV if it's NTSC format is 30 frames persecond and 25 frames persecond for PAL format. Other related thing to read up on; "Persistance of Vision"

I just suddenly felt like starting a new project... something fun and funny at the same time very loose, besides I haven't done 2d animation for a long long time... besides my crappy flip note pads.

I think, it's because I set one of my mp3's on loop while I was working on the 11sec May competition. It was looping a sound track from the anime; Paprika. A very catchy tune at that. 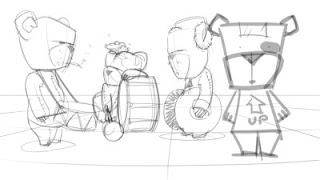 It kinda brained wash me to see odd teddy bears suddenly playing in a band to the beats of a marching song on stepped animation..... strange how inspirations materialize from strange people....
Posted by Marcus Tee Jin Liang at 3:08 AM 1 comment:

Lots of excuses and procrastination, besides that had to send dog to vet a few times the past week as well as make a round trip down to JB and back on the same day.

Anyhow, I've still got 50% of animation to be done for 11sec May competition in the next 10 days, another scene of Reservoir Dogs to study by this week and my monthly animation practice to be done, not to mention reading up more and doing more figure studies. Looks like I have to study overtime the next week.

Just some rough sketches and thumbs for 11Sec May : 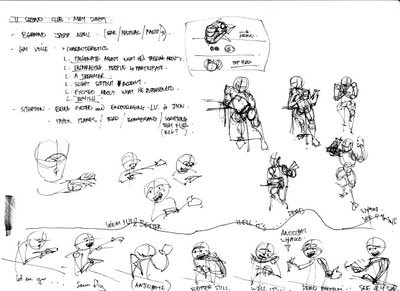 Will be posting work progress at the end of the month.

House is still in one piece, changed a living room light bulb if anyone's interested.
Posted by Marcus Tee Jin Liang at 1:12 AM 2 comments:

Before you read onwards, this post consist Spoilers from the film American Pop (1981) directed by Ralph Bakshi.

So if you haven't watch it, go watch it first, it's a great movie especially if you like life movies and eclectic music genre.


Well... Saturday was "Watch A Movie" day ~ watch a movie, dissect it and study it. Compiled the studies into 14 pages and could have gone more for a few more scenes, but times up, maybe will write a part 2 for it in the future. The other scene which I didn't but would love to write about would be "Tony and Pete Bench Scene", a great scene to study character and subtle drama acting, twist and turning point.

Please pardon my un~grammar~ness hand writing with horrible spelling, was writing it on the fly as ideas, thoughts and opinions randomly pop into my head about the movie, so enjoy it if you can....

I won't be posting everything about the movie here, it'll just flood my blog if you want there's a link at the bottom of the page where you can go download the full movie study notes :) .... What I would be sharing is a scene, "Benny's Piano Suicide Scene". Especially about the characters behavior and thoughts during this scene as well as the importance of it. 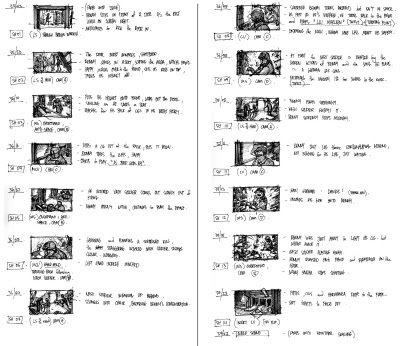 I chose to break down this scene because of the quiet, slow and subtle but powerful dramatic ending for Benny. Soft and subtle because through out the scene is mainly focused on the ruined abandoned interior and Benny playing the piano, for most of the time you hear him playing the piano and some shuffling of feet and furniture and then ending with brutal punctuation of the machine gun.

Besides the mood it was set in, the main reason I chose to this scene was the compelling characteristics of both characters and it's subtle deep underlying ~ well it's WW2, one of them a Nazi, the other a US soldier, face to face and at gun point, yet they don't start going berserk killing each other off, how much more irony can that get?

The scene a calm one, scene fades in and fades out when it's done, it's as though to showcase the last performance of Benny, the song he plays is like a lure for someone to look for him, an announcement to the surroundings that he is here and he is doing what he loves doing, playing the piano.

The dramatic power of how music could change a person, to make him take a different course of action. When Benny found out a Nazi soldier was behind him, he decided to play *"Lili Marleen". This song stopped the Nazi soldier from Acting on his primary objective ~ to kill Benny. Why did he stop? Why didn't he just killed Benny off? By procrastinating his actions he could have been shot by a US soldier, the song Benny was playing could have been an alert that Nazi was in the vicinity. So why risk blowing the cover? From my point of view, I believed that the Nazi Soldier knows Benny will one way or another killed by him, he knows Benny knows that too, the Nazi also knew he's not going to survive much longer either, injured and once he guns down Benny the other US soldiers will come swarm and surround him. So, he lets Benny finish the song before finishing him ~ in a way a gesture of appreciation, he even wishes thanks too.

Benny being Benny the person he is, he's cool, mellow fella, never really surprised or shocked maybe due to the upbringing of his mafia family but never followed their footsteps, just being him, alone in his own world of music. I feel that this scene plays an important role in Benny's life episode, not just to end his story in the movie but also to play out his true character and who he really is and why he really joined the army. The reason Benny gave his father was that he wanted a real job, as well as just married and going to be a father to Tony. But in truth, Benny just wanted to get away from his father, his wife and "The Family", he wanted to be free ~ even if it means dying and this scene proves it, it was suicide not execution that killed Benny.

When Benny found a piano in an abandoned house, he went to it and started playing... who in the right mind would start playing a piano in the middle of a battle field, it gave out his location and not only expose him but his comrades to the enemy. This shows that he doesn't really care for his nor his comrades life when it comes to music, that's all he cares about. When a Nazi soldier came out of hiding and sneaks up to Benny just to be foiled by a chair, Benny doesn't reach for his gun or tried to escape or begged for his life, he turned back to the piano and played "Lili Marleen" a German love song ... WHY?! Why even a German song? Why not just continue playing the same song.... As surprised as Benny could ever be, he cared less if he was killed or not, in a way he got what he wanted ~ freedom, freedom to live his life, free of the corrupt. he never wanted the luxurious life of the Mafia nor the burden of other peoples issues, forced to marry a Mafia's Daughter for his father as well as the responsibilities of a father to the child that was about to be born. All he ever wanted to do was play the piano, that's all. So when faced with the Nazi soldier, he knew his time has come, he also knew that the Nazi soldier wasn't going to last much longer as well. Being the eccentric prodigy pianist, Benny decided to play "Lili Marleen" for the success of the Nazi's kill ~ Benny. He knew that it would be meaningful both to the Nazi Soldier because would most likely be the last happy moment in his life to hear this song and to Benny the appreciation and opportunity to play it. Benny knew both of them are going to enjoy it and both of them are going to die and this is the last joy both of them are going to feel.

This scene had a simple setup, one word dialog (danka), maximum drama in characters minimal action performance and the choices they make, the underlying of the scene.

Well I think that's more than enough for now... go watch the movie it's a good one but might not be every one's cup of tea. It was certainly for me :)

Yop... if you're reading this and you happen to personally know the egghead guy typing this please drop me your blog link to be added.

By the way, just finished watching Ralph Bakshi's American Pop, will have some sharing soon.
Posted by Marcus Tee Jin Liang at 12:54 AM 1 comment:

This will be a short introductory of me and why I started this blog in the first place.

Being the person I am and the person I am is a lazy procrastinating one, I decided to take a leap of faith and stop work and live off my savings for a year in pursuit of training myself in the field of art and animation as well as my personal life of setting goals, chores and dreams I'd like to achieve within this one year span, starting off with waking up early, like before lunch and hopefully by 8am ....... which I have yet to achieve.

As for the Blog, I started it to force myself to document my studies and in short, to humiliate myself based on how well or horrible my progress is coming along. As well as share what I've learnt along the way.

(Daffy Duck Imitation)
As of now, it is truely and utterly despicable!

Why? Because I've yet to get into gear and according to my study schedule it's already 4 days in and I've only followed it half heartedly.......... which brings us to the creation of this first post.

So, welcome and thank you for reading this far! Grab some drinks, pillage some snacks, sit back and enjoy the this boring ride about me.
Posted by Marcus Tee Jin Liang at 1:01 AM 5 comments: